Lyrics How To Rob A Rapper – YG ft. Mozzy, D3szn

And it seem like every Friday at the eight
He flex crustation, men used, he like to date
Sit it out in the front, catch him at the valet
Never mind, it’s Beverly Hills, you don’t wanna catch no case
Scratch that, big Bach, he gon’ slip up again
Gotta make it count so you gotta score to win
Don’t get frustrated, it’s complicated, he always with his friends
Look, there he go, by himself slippin’, he in that Benz

Ayy, we gon’ use a dummy pace to hit his management
I’ma need your artist on my album, what’s the damages
I got the cameraman with me, let’s shoot a movie too
Before I hung up on homie, told him it’s bulletproof
They on the way, call the gang and put him on the plate
A watch alone without the stones, it go for thirty K
Slide luxury under where Minnesota plays
Youngin in the back lookin’ sketchy, he never show his face

There they go in that bourbon, they let him through the gate
Finna bounce out on it, ’til I told him Wait
We gon’ let him get bumped up before we strip his ass
Nah, never mind, n**ga, let’s get this bag, what’s happenin’
Run the pieces, can curl, lil’ n**ga, give me that
Or you gon’ have to eat this fifty pack, yeah
F**k the Cuban, they callin’ to get this tennis back
Already sold, it ain’t no gettin’ it back, ah

These rappers wanna come to the bricks and flash chips
In the hood, we was structured for robbin’ and field trips
It was a Friday, the perfect time to hit a lick
You tryna use the hood for clout on time, we plottin’ on your s**t
I see him pull up, I chuck the hood up, you know you good, blood
Sick the homegirl’s on a n**ga, make him think it’s hood love
And he ain’t been a gangster so you know that it’s a stickup
You better pay the homies ‘fore you try to come flick up

Okay, it’s time to make a move on this n**ga
Give me all your s**t or, b**ch, I’m pullin’ the trigger
I need that chain, the watch and all the cash you got
Don’t be thinkin’ s**t sweet when you pull up on my block
To the jewelry, to the plaza, turned the jewels to some guap
I could teach you how to rob, I could teach you how to flock
This Bonny on the watch and we ain’t givin’ no passes
If he move funny, better blast it 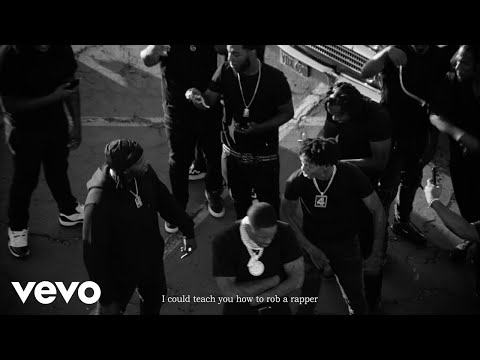